If “big things come in three’s” then this week saw a lot of really big things happening across the American landscape. 1) The U.S. Supreme Court upheld the constitutionality of the ‘Affordable Care Act’ while 2) the U.S. House of Representatives voted to hold the Attorney General of the United States in Contempt of Congress.

And while I think I’ve got a pretty good idea of which one History will remember, the third ‘big thing’ was no less significant; namely, the death of legendary essayist and blogger, Ms. Nora Ephron.

While many (far wiser than I) have spoken to her impressive body of work in film and literature, her passing prompted me to pause and say an unspoken prayer of thanks for her life and her work. She had an uncanny ability to remind us that: 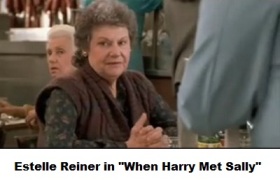 “I’ll have what she’s having.”

Yes, Estelle, there are Constants in this life and Nature agrees. Her evidence is everywhere.

Gravity, for example, isn’t called a law for nothing. It doesn’t care whether you’re rich or poor, black, brown, yellow, purple or white. Gravity says if you jump over the edge of a cliff, you will be re-enacting your own version of the plummeting coyote in a bad Road Runner cartoon. Yes, it may be your cartoon, but it has pretty much the same dotted-line ending the whole world over.

More Constants: The earth revolves around our sun and your life will not be spared heartache, disappointment and mind-numbing loss. No one is exempt.

When I heard the news of Ephron’s passing, I was taken back to a camping trip in the Great Smoky Mountains National Park. If you’ve ever been there, you know the hiking trails constitute an incredible part of the park’s majesty. In getting up early to take one of those trails, it wasn’t all that surprising to see other campsites coming to life, each telegraphing pretty much the same agenda. Waving to our campground neighbors, each party set off to find their own day’s adventure. Ours? We were off to see Charlies Bunion.

Charlies being a place, not a person, I remember the summer heat and the quiet sound of my tennis shoes on the trail floor. By mid-morning, I remember the stings of dive bombing mosquitoes (each, the size of a small elk) and the stabbing pains of my shin-splints giving me real cause to review why I’d thought this was going to be fun. Lunch was simple, just what we had packed that morning back at camp, so our meal was short…there was still a good stretch of trail between us and the tops of the ridge we’d declared as our destination. My little sister was along – whining! (groan) And me and my new campground friends? We kept trying (unsuccessfully) to get ahead of the group so no one else would think we were ‘with them‘. On and on we went, higher and higher. But there were bright spots too. We played in mountain springs and tried to look cool when a herd of deer came bolting across our path…scaring us far much more than we did them as they bounded out-of-sight to somewhere quieter. I remember the relief when the appearance of an old-style water pump signaled we’d be stopping for awhile, each of us elbowing the others for the right to be the pumper.

Eventually, at long last, we reached our summit.

We could see the whole valley stretching out forever like it had for our ancestors who walked through those same woods with the Cherokee in the days before there were any pumps to fight over. Wow!

But it’s interesting that now, years later, it isn’t the ridge-top valley view I remember best. The most vivid memories were back in camp later that night. One camp site would wander over to the others’ fire and exchange stories of the day’s adventures. Over and over again, I caught just a whiff of what it must have been like when the early settlers were finding their way through those same mountains on their way to a Future promised, but largely Unknown. I swear I could just almost see them through the smoke from our fire; gathered around the light of theirs under ancient trees who’d seen us both. To this day, it makes the hairs on my arm stand at attention.

I am struck how each of us hikers, like those who’d walked there before, had each followed different trails to get where we were going that long summer day in Tennessee. That night, each of us had different aches and pains to show for it. Each of us carried our own mental snapshots of what we must have looked like to the deer as they sprang past us and into the deep forest beyond. Who knew, but it turns out the real value of the day wasn’t reaching the top, it was found in everything each of us went through to get there (and back). That was the stuff of the roaming campfire conversations that night. It was the re-telling of our adventures sparking the laughter and prompting offers to our new-found friends, inviting them to join us in roasting marshmallows around our fire.

Like you, I sometimes feel so very uncertain of what my future holds. I can only hope that we’ll all be in love, dodge heart attacks and live to happy old ages. I pray that loved ones will somehow all be reunited in the hereafter. But none of that, can I guarantee and neither can you.

Yet all of it is somehow so much easier to imagine when I open up to others around me…others who may have had a similar experience to mine on their hike. I think we’re closest to those around us when we show our unfinished sides.

I’m grateful to wise Old Souls like Nora Ephron who choose to pass among us for a little while. I honor the time and care she took in reminding us that while each of us has our own path in Life, in an oddly cool way, we all get there together. None of us will ever be truly alone if we trust the Constants and open ourselves up enough for others to see inside us. The ironic pay-off is if I do that on a regular basis, my eyes are the ones that open to the adventures around me.

Life is not all about the mountain tops because as a people, we don’t live there. We can’t help everyone. But I cling to the childish idea of if each of us were to help just one fellow hiker during our trip, we’ll all get through this life a little easier, a little happier and with a new appreciation for a well-torched marshmallow.

Permit me to toast you and the life of Ms. Nora Ephron by recounting Vincent Crummles (Nathan Lane) closing wedding toast in Nicholas Nickleby:

“In every life, no matter how full or empty one’s purse, there is tragedy. It is the one promise life always fulfills. Thus, happiness is a gift, and the trick is not to expect it but to delight in it when it comes; and to add to other people’s store of it.

What happens if, too early, we lose a parent, that party on whom we rely for only…everything? What did these people do when their families shrank?

They cried their tears.

But then they did the vital thing: they built a new family, person by person. They came to see that family need not be defined merely as those with whom they share blood, but as those for whom they would give their blood.”

“In Life’s Journey, Love will play its part”

This week, make it a point to travel well as you follow your own trail, remembering that as you do, you’re not by yourself. Others (like Nora) have gone on before us. And to Ms. Ephron?

Thank you for being so patient in showing us what we already knew…we’ll be along presently. 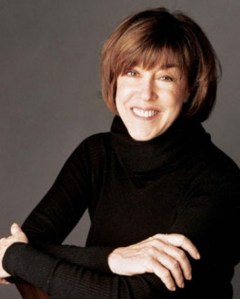 She is best known for her romantic comedies and was a triple nominee for the Academy Award for Writing Original Screenplay for three films: Silkwood, When Harry Met Sally… and Sleepless in Seattle. She sometimes wrote with her sister Delia Ephron. Her last film was Julie & Julia. She also co-authored the Drama Desk Award-winning theatrical production, Love, Loss, and What I Wore.

Born and raised in the Midwest, Dan lives in the Chicagoland area. With a grown son from a previous marriage, he has since built a committed relationship of 33 years with his partner Rick, the Love of his Life. Having written his whole life, he blogged for years because he has to write…he can’t help it. Know the feeling? There’s ‘good‘ to be found in all of it. “If all I do is leave someone (or something) better than I found them, then I’ve done my part. Thanks for letting me grace your screen, if only for a little while.”
View all posts by dan4kent →
This entry was posted in Hope, Inspiration, Life, Life Lessons, Love, News and tagged Everybody hurts, Great Smoky Mountains National Park, Hiking, Life's a Hike, Nora Ephron, We get there together. Bookmark the permalink.

4 Responses to EVERYBODY HURTS